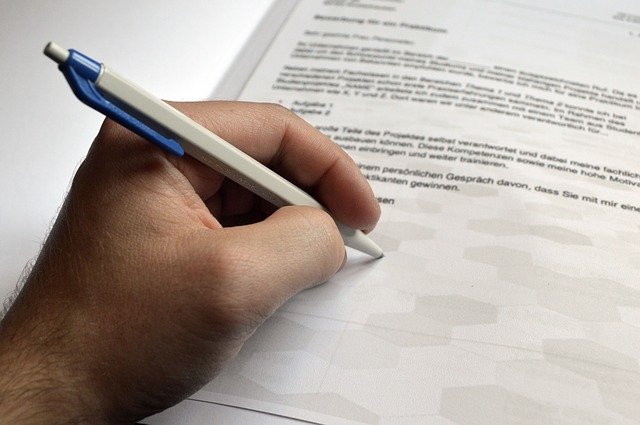 
30. Scissors
Medieval torture device is a handy tool for most people. But any left-handed person will agree, using regular scissors can be a pain in the butt.Most left-handed people don’t truly realize they’re different until they reach pre-school and realize it’s impossible to use right-handed scissors. If the teacher doesn’t have a left-handed pair, they’re forced to either cut righty and slash their artwork to bits or turn the scissors upside down and get premature arthritis.Ergonomic handle scissors, not for lefties though.

29. Single desks
Left-handed people aren’t free to sit wherever they like.They have to find a spot where they’re not bumping elbows with the person sitting next to them.You know, there were never enough lefty desks. Just like lefty scissors ,why did they ever think these were a good idea?Oh it’s so convenient to have a desk attached to the right side of the chair. Oh wait, no it isn’t.

28. Dry Erase Boards
Is there anything worse than an ink stained hand and unsightly smudges across a white board? you’ll quickly learn everything is wiped away almost as soon as it’s written.


27. Mugs
Mugs face the wrong way.Mugs can be a fun way to express yourself. For us left-handed people, the graphic on mug winds up facing us instead of everyone else.

26. Measuring Tape
You thought measuring accurately with a measuring tape was difficult? Wait till you have to do it upside-down.

25. Video Games
No, it’s really not more difficult for us lefties to play games, whether we’re using a keyboard and mouse or a controller.The biggest problem for lefties is when a one-handed tool requires fine motor skills and coordination to use it properly, but it’s designed in such a way that using it in the left hand is impossible or uncomfortable.


24.Can Openers
Being a lefty which is probably half the problem, but does anyone else struggle using a can opener? One before that just mashed the can into a different shape without cutting the lid. Surely there can’t be a technique to this.All you wanted was some beans and toast!

23. Pens on Chains
In a lot of places like post offices and banks you find pens chained to the desk or counter and of course they are chained to the right hand side and usually on a chain so short that they cannot be used by lefthanders!

22. Ice Cream Scoops
Sure, mess with left-handers’ use of stationery – but stopping them from enjoying a scoop of ice cream is surely going too far!


21.Pens
Ball point pens don’t work as well for lefties because we push the pen into the paper. The struggle is real.Speaking of anti-lefty conspiracies, check this out. As if the world hadn’t created enough problems for left-handed people! What about decals on pens that are upside down. Yeah, thanks.

20. Crosswords
You could learn to write in reverse, but why should you? Unless you use some super duper instantaneously drying ink or ultra-resistant pencil, you’re going to end up with a dirty hypothenar. Been waiting to use that term for over a decade, thanks and you’re welcome. Absolutely disgraceful to be honest.

19. Spiral Notebooks
When you’re left-handed, writing in spiral notebooks and three-ring binders is a special kind of torture. The rings make it impossible for left-handed people to lay their hands flat on the page and write normally.Why is this the case? Well, because find them all incredibly unpleasant to write in. And while that this may not seem like a big deal, it absolutely is. Can you say “ouch”? Writing in one of these means also creating deep and painful indentations on your beloved left hand.

Duh. What could have given it away?

17. Weird assumptions
The brains and bodies of lefties may operate differently than those of right-handed people.“Wow, did you know being left-handed means you’re so much better at using logic to solve problems??”

16. Swiping Cards
Why does the swiping section always have to be to the right of the machine? Discrimination, that’s why.


15. Playing Cards
When left handed people play cards they hold a hand of cards,they splay them so that the top left corner is showing. I imagine this is ingrained from learning to play card games as a child and many standard decks of cards not having the card identifier in the top right.If the fact that you can’t swipe your card wasn’t bad enough, how about the fact that playing cards are specifically designed to be fanned out in the right hand? Infuriating stuff.

14. Firing gun
Let’s face it, the world is just not made for lefties.Nowhere is this more evident than in shooting sports sure, it’s not something that most of us face every day – but, still, getting hit in the face in this manner looks like the opposite of fun.

13. Using a Pen
Left handed writing is hard. Lefties have to push the pen away from their hand while simultaneously creating legible loops and slants, crossing ‘t’s and dotting ‘i’s. Pushing means it’s more likely that the pen tip skips and the line gets broken.


12. Binders
Nothing was worse than trying to take notes in a three-ring binder.Even right-handed people hate these, but they become exponentially more irritating for a leftie.

11. Getting too Excited
The experience of meeting another left-handed person can really be a big deal!


9.Baseball Mitts
Trying to find one which suits your specific needs is harder than making any catch.

8.Zippers
When you zip up a coat or jacket, the zipper is almost always on the right side instead of the left, and the same goes for women’s button-ups. Ultimately, this isn’t actually too difficult for a lefty, but it’s generally the concept that most items are biased that becomes annoying.We’re pretty sure that this one is a conspiracy to make life just that bit more difficult for lefties.


6.Death
There’s an often-quoted statistic that right-handed people live on average nine years longer than left-handed people. But is there any truth in it?

5.Kindles
There is a struggle to prop up kindle the right way and turn the screen off five times in if you are a left hand.

4.Being Misunderstood
Breaking your left arm and everyone saying “well at least it wasn’t your good arm”


3. Cup Holders
Bottle or cappuccino from the cup holder on the right side of the driver’s seat.It’s almost as if the whole car is built for someone with your exact opposite bodily needs.

2. Latte Art
Once people start handling the cup and drinking the coffee, they probably pay less attention to whether their latte art is “upside down.” Maybe you should get some cups without handles to alleviate the problem entirely.

1. Being too intelligent
If you’re left handed you’re more likely to be a genius, says study. Maybe it’s genetics. Or maybe it’s because you’ve had to live your whole life in a world which requires you to think innovatively. But, either way, being a leftie means you’re likely to be smarter than a right-handed person, apparently!

Some Smart Ways of Gathering Funds for ...

Benefits of Spelling Quizzes and How you can Prepare for it

Spelling Quizzes: Are you looking for ways to excel in your 12th grade spelling words and broaden your vocabulary? Do you often catch yourself making careless spelling mistakes while drafting an essay or ...