Technology
Home›Technology›LED Light Bulbs: How are they Made? 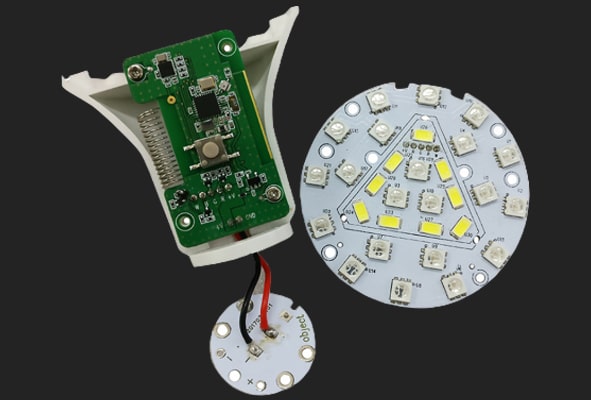 LED Light Bulbs : One-hundred-and-thirty years ago, Thomas Edison completed the first successful sustained test of the incandescent light bulb. With some incremental improvements along the way, Edison’s basic technology has lit the world ever since. This is about to change. We are on the cusp of a semiconductor-based lighting revolution that will ultimately replace Edison’s bulbs with a far more energy-efficient lighting solution. Solid state LED lighting will eventually replace almost all of the hundreds of billions of incandescent and fluorescent lights in use around the world today. In fact, as a step along this path, President Obama last June unveiled new, stricter lighting standards that will support the phasing out of incandescent bulbs (which already are banned in parts of Europe).

So, let’s begin by taking a look at how traditional incandescent light bulbs are manufactured. You will find that this is a classic example of an automated industrial process refined in over a century of experience.

While individual incandescent light bulb types differ in size and wattage, all of them have the three basic parts: the filament, the bulb, and the base. The filament is made of tungsten. While very fragile, tungsten filaments can withstand temperatures of 4,500 degrees Fahrenheit and above. The connecting or lead-in wires are typically made of nickel-iron wire. This wire is dipped into a borax solution to make the wire more adherent to glass. The bulb itself is made of glass and contains a mixture of gases, usually argon and nitrogen, which increase the life of the filament. Air is pumped out of the bulb and replaced with the gases. A standardized base holds the entire assembly in place. The base is known as the “Edison screw base.” Aluminum is used on the outside and glass used to insulate the inside of the base.Originally produced by hand, light bulb manufacturing is now almost entirely automated.

First, the filament is manufactured using a process known as drawing, in which tungsten is mixed with a binder material and pulled through a die (a shaped orifice) into a fine wire. Next, the wire is wound around a metal bar called a mandrel in order to mold it into its proper coiled shape, and then it is heated in a process known as annealing, softening the wire and makes its structure more uniform. The mandrel is then dissolved in acid.

Second, the coiled filament is attached to the lead-in wires. The lead-in wires have hooks at their ends which are either pressed over the end of the filament or, in larger bulbs, spot-welded.

Third, the glass bulbs or casings are produced using a ribbon machine. After heating in a furnace, a continuous ribbon of glass moves along a conveyor belt. Precisely aligned air nozzles blow the glass through holes in the conveyor belt into molds, creating the casings. A ribbon machine moving at top speed can produce more than 50,000 bulbs per hour. After the casings are blown, they are cooled and then cut off of the ribbon machine. Next, the inside of the bulb is coated with silica to remove the glare caused by a glowing, uncovered filament. The label and wattage are then stamped onto the outside top of each casing.

Fourth, the base of the bulb is also constructed using molds. It is made with indentations in the shape of a screw so that it can easily fit into the socket of a light fixture.

Fifth, once the filament, base, and bulb are made, they are fitted together by machines. First, the filament is mounted to the stem assembly, with its ends clamped to the two lead-in wires. Next, the air inside the bulb is evacuated, and the casing is filled with the argon and nitrogen mixture.


Finally, the base and the bulb are sealed. The base slides onto the end of the glass bulb such that no other material is needed to keep them together. Instead, their conforming shapes allow the two pieces to be held together snugly, with the lead-in wires touching the aluminum base to ensure proper electrical contact. After testing, bulbs are placed in their packages and shipped to consumers.

Light bulbs are tested for both lamp life and strength. In order to provide quick results, selected bulbs are screwed into life test racks and lit at levels far exceeding normal. This provides an accurate measure of how long the bulb will last under normal conditions. Testing is performed at all manufacturing plants as well as at some independent testing facilities. The average life of the typical household bulb is 750 to 1,000 hours, depending on wattage.

LED light bulbs are built around solid-state semiconductor devices, so the manufacturing process most closely resembles that used to make electronic products like PC mother boards.

A light-emitting diode (LED) is a solid state electrical circuit that generates light by the movement of electrons in a semiconductor material. LED technology has been around since the late 1960s, but for the first 40 years LEDs were primarily used in electronics devices to replace miniature light bulbs. Within the last decade, advances in the technology finally boosted light output high enough for LEDs to begin to seriously compete with incandescent and fluorescent light bulbs. As with many technologies, as the cost of production falls each successive LED generation also improves in light quality, output per watt, and heat management.

The computer industry is well suited to manufacture LED lighting. The process isn’t a whole lot different than making a computer motherboard. The companies making the LEDs themselves are generally not in the lighting business, or it is a minor part of their business. They tend to be semiconductor houses that are happy cranking out their product, which is why prices on high-output LEDs has fallen so much in the last 15 years

LED bulbs themselves are expensive in part because it takes a number of LEDs to get wide-area illumination instead of a narrow beam, and the assembly cost adds to the overall price. In addition, assemblies consisting of arrays of LEDs create more opportunities for product defects.

An LED light consists of four essential components: an LED circuit board, a heatsink, a power supply, and a shell. The lights start out as bare printed circuit boards (PCB) and high luminance LED elements arrive from separate factories which specialize in making those components. LED elements themselves create a bit of heat, so the PCB used in lighting fixtures is special. Instead of the standard non-conductive sandwich of epoxy and fiberglass, the circuit board is laid out on a thin sheet of aluminum which acts as a heatsink.

The aluminum PCB used in LED lighting is coated with a non-conducting material and conductive copper trace lines to form the circuit board. Solder paste is then applied in the right places and then Surface Mount Technology (SMT) machines place the tiny LED elements, driver ICs, and other components onto the board at ultra high speeds.

The round shape of a traditional light bulb means that most LED printed circuit boards are circular, so for ease of handling several of the smaller circular PCBs are combined into one larger rectangular PCB that automated SMT machinery can handle. Think of it like a cupcake tray moving from one machine to the next along a conveyor belt, then at the end the individual cupcakes are snapped free from the tray.

Let’s take a look at the manufacturing steps for a typical LED light bulb meant to replace a standard incandescent bulb with an Edison Screw. You will see that it is a very different process from the highly automated processes used to manufacture our familiar incandescent bulbs. And, despite what you might imagine, people are still very much a necessary part of manufacturing process, and not just for testing and Quality Assurance either.

Once the larger sheets of LED circuit boards have passed through a solder reflow oven (a hot air furnace that melts the solder paste), they are broken up into the individual small circuit boards and power wires manually soldered on.

The small power supply housed in the body of the light bulb goes through a similar process, or may be delivered complete from another factory. In either case, the manufacturing steps are the same; first the PCB passes through SMT lines, then it goes to a manual dual in-line package (DIP) assembly line where a long row of factory workers add one component at a time. DIP refers to the two parallel rows of leads projecting from the sides of the package. DIP components include all integrated chips and chip sockets.

While LED lights burn several times longer than incandescent or CFLs and require less than half the energy, they need some form of passive heatsink keep the high-power LEDs from overheating. The LED circuit board, which is made from 1.6-2mm thick aluminum, will conduct the heat from the dozen or so LED elements to the metal heatsink frame and thus keep temperatures in check. Aluminum-backed PCBs are sometimes called “metal core printed circuit boards,” and though made of a conductive material the white coating is electrically isolating. The aluminum PCB is screwed in place within the heatsink which forms the lower half of the LED light bulbs.

After this, the power connector board is fixed in place with adhesive. The small power supply converts 120/240V AC mains power to a lower voltage (12V or 24V), it fits in the cavity behind the aluminum PCB.

Shell assembly consists of locking the shell in place with screws. A plastic shell covers the power supply and connects with the metal heatsink and LED circuit board. Ventilation holes are included to allow hot air to escape. Wiring assembly for plug socket requires soldering wires to the bulb socket. Then shell is attached.

Next, the completed LED light bulbs is sent to burn-in testing and quality control. The burn-in test typically lasts for 30 minutes. The completed LED light bulbs is then powered up to see if it is working properly and burned in for 30 minutes. There is also a high-voltage leakage and breakdown test and power consumption and power factor test. Samples from the production run are tested for high-voltage leaks, power consumption, and power factor (efficiency).

The finished LED Light Bulbs pass through one final crimping step as the metal socket base is crimped in place, are bar-coded and identified with lot numbers. External safety labels are applied and the bulb is inked with information, such as brand and model number. Finally, all that’s left is to fix on the clear plastic LED cover which is glued in place.

Benefits of Spelling Quizzes and How you ...

The Top 10 Benefits of Playing in Online Casinos

Online Casinos: In this mode era of technology, the internet has indeed influenced every aspect of the way people do things as well as gambling is not an exception. Whether ...